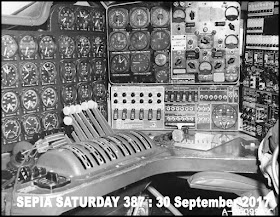 Sepia Saturday prompt #387 shows the cockpit of a 1948 B-36 bomber. I think I have a pretty good match in my family history collection this week.

The photographs below were taken by my uncle Kenneth Forbes Morrison of other planes that were flying alongside his, when he was training to be a pilot in Canada in WW2. They are Cessna Cranes, as shown here on the Canadian War Plane Heritage Museum site. The Cranes were used by the RACF in Canada to teach recruits from allied Commonwealth countries to fly multi- engined aircraft. Ken from New Zealand was one of those recruits, as was my father-in-law Bob Featherston from Australia. Ken took quite a few snaps of his time in Canada and the US and I think that after his death either my mother or another member of the family must have lovingly placed them in an album of which I am now the keeper. I've blogged previously about Ken, the uncle I never knew. 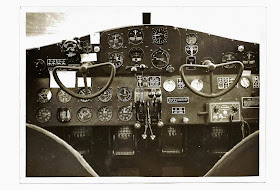 This photograph of the Cessna controls is also from Ken's album. The clue to the type of plane it was is the word Cessna, which appears on each of the foot pedals below the control panel. 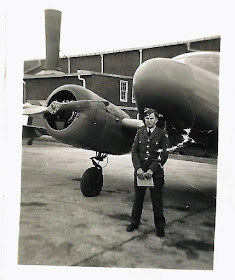 I don't think this is Ken but it may be a snap he took of one of his fellow pilots, standing in front of a Cessna Crane and proudly displaying his graduation certificate.

After Ken qualified he went to England where he flew a Halifax heavy bomber. It was in one of these much larger planes that he was tragically shot down and killed while taking part in a bombing raid over Germany, along with all his crew and so many other young men, on 23 June 1943. 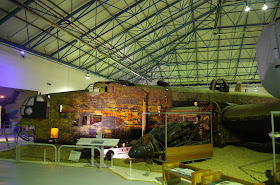 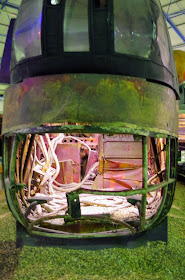 View inside the cockpit of the recovered Halifax, which a friendly volunteer guide pointed out was very spacious, compared for example with the Lancaster bomber flown by Bob Featherston.

This restored Lancaster heavy bomber was also part of the collection

For more blogs prompted by Sepia Saturday #287, just check those dials, pull the levers, raise the flaps, prepare for take off and go up, up and away to your next destination here


"They had bombed London, whether on purpose or not, and the British people and London especially should know that we could hit back. It would be good for the morale of us all."
— Winston Churchill, British Prime Minister, ordering the RAF to start bombing German cities, cited in M. Hastings, Winston's War, 25 August 1940

It may have been good for British morale generally but it was far from good for all the families of those thousands of young men who were to lose their lives as a result of Churchill's order, not to mention all the civilians on the ground who must also have been killed.

Here is a song for Ken, Blue Yonder, sung by my favouite Canadian, David Francey.
https://youtu.be/gOCzkekEKpQ
Jofeath at 16:50
Share